HomeBlogCan Dogs and Cats Be Vegetarians?

Can Dogs and Cats Be Vegetarians? 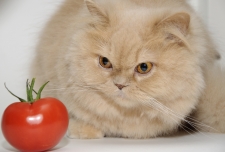 There are a number of vegetarians and vegans out there looking for ways to keep their pets healthy without feeding meat or animal products. The question is: can dogs and cats be healthy for their entire lifetime eating this way? While it’s a romantic idea, the answer is, almost undeniably, no. While there are some vegetarian diets that can sustain dogs, you will find it is not ideal. Cats cannot be fed anything except a meat-based diet. They cannot use vegetable proteins to sustain themselves and will die without animal tissue in their diet. If you are a vegan and cannot bring yourself to handle meat products, a carnivorous animal is not for you!

Proteins are found in all foods but certain kinds are more suited to certain species depending on how that species evolved. Herbivores are suited to obtaining their proteins from plant sources, carnivores from animal sources. Charles Darwin published his great works The Origin of Species in 1859. After a 5 year voyage along the coasts of South America, he concluded that the animals and plants he observed all had highly specialised adaptations that allowed them to survive. He was the first to put forth the theory that these animals and plants had been changing over a long period of time through a process he called “natural selection”. This allowed the strongest and most physically suited to their environment to survive. Though he did not know how long this process of animal evolution had been taking place (several billion years), he was accurate in his theory. Fossil records have now proven that the first carnivorous creatures began to appear over 100 million years ago. Dogs were domesticated by man from wolves around 15-30 thousand years ago. Even then, man used dogs to help him hunt and farm and shared meat with them and cats kept grain stocks free of rodents. This changed around 120 years ago when commercially processed foods appeared. This short period of time does not allow for a species to change from eating a meat-based whole food diet to a grain-based processed diet. It also does not allow for a species to change from eating meat-based proteins to plant-based proteins without serious negative biological effects.

When we are choosing a pet, we must not put our own system of ideas and beliefs upon them. We choose to have dogs and cats in our lives because of their appearance, loyalty, their personality and their behaviors. We need to remember that we love our dogs and cats BECAUSE they are carnivores. Humans chose to partner with them because they are protective, hunt and eat prey. Modern science tells us that evolutionary adaptations on the level of genetics and cellular metabolism take hundreds of thousands or millions of years to occur. These changes happen gradually to mirror the ever-changing environment around the organism. Cats and dogs are no exception. Their evolution has resulted in fundamental genetic changes. They have been evolving for over 100 million years to become what they are today: meat eaters.  Cats are also classified as obligate carnivores which means they cannot live on plant-based proteins. They do not produce the enzymes needed to utilize plant proteins or have the ability to create the amino acid taurine within their own bodies. Plant based proteins do not contain taurine and so this nutrient must be present in a raw form. Meat contains naturally occurring taurine. Adding taurine in a synthetic form to a vegetarian diet will not solve the issue. Meat proteins also have a unique molecular make-up that cats and dogs have evolved to digest. They cannot optimally utilize plant proteins simply because we ask them to. Without species-appropriate nutrition, animals can suffer from inflammatory and degenerative diseases which are both immunological states of stress. In many cases, inappropriate food is the cause of this stress. Dogs and cats may also be at higher risk for developing diseases that appear to be genetic. The specific types of proteins that an animal consumes are the building blocks of life. Without a good foundation, the cells and the organism cannot reach its genetic potential. It will always be compromising which, in turn, shortens life expectancy and quality. This is compounded by the fact that our modern dogs and cats have been inbred by man to look and behave in certain ways leaving them more vulnerable to genetic disease. This means that they have an even greater need than their wild ancestors to eat species appropriate foods in order to reach their genetic potential.

If you are looking for a vegetarian pet, it might be more appropriate to consider a horse, a pony, a rabbit or a guinea pig. These animals have all evolved to specialize in eating plant-based proteins. If you are a vegetarian that has a dog or cat, you will need to put your ideologies aside in order to make a clear choice for the future of your pet.