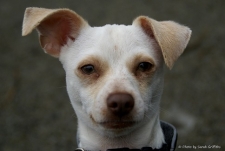 Jerry is a Jack Russel/chihuahua mix. He was surrendered to a shelter in San Bernadino, California at the age of 8 months.  He was then neutered and sent to Canada at the end of October 2014 at 9 months, very sick, timid, and thin.  He was extremely picky about food.  His foster mom, Diane tried many different varieties of food with not much luck until one day, Jerry started to steal her dog's food. He finally started to eat without being hand-fed.  Jerry then began to eat everything and wait for his chewy treats afterward. 3P co-owners Debbie & Paul Benson adopted him at the age of 1 year old. He eats everything now including wood! The rest is pretty much history and he loves his new home and his new raw diet. He is thriving now! Jerry has been an amazing addition to the family and we can't thank L.E.A.S.H. enough for bringing us together.