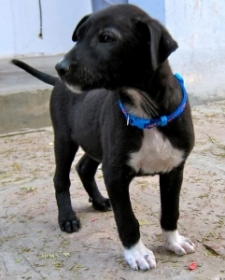 Did you know that Kai is a Desi dog? That means he is from the streets of India and traveled thousands of miles on a plane to come to Canada and live with 3P co-owners Debbie and Paul Benson. What a lucky boy! Here is his story from the rescue agency that brought him to Canada:

Kai was born on Dec 3rd, 2012. The litter had 6 boys and 2 girls. They were born in a park in a residential area. For the first 3 weeks, they lived safely in a little puppy pen made for them. When they started to move about at 3-4 weeks, there were many complaints as they were running all over the park and getting in the way of walkers and joggers. I had to relocate them to the corner of a road and create an enclosure so that they would not run out onto the road. In a couple of weeks, they outgrew this enclosure and had to be moved out into a small room, where they were fed and cared for but had a sorry life as they did not have much space. Only after a foster home was found for them did they start to enjoy life.

Soon arrangements were finalized for them to fly to Canada to look for their forever homes. Kai, Lewis, and Charles, 3 black pups traveled together.

As a pup Kai was a cool boy, ready to play, be carried, and loved. He would always come up to me after a meal and give a tiny lick as if to say thank
you.

Kai looks very much like his father- 'Kalu', meaning black. Kalu is a handsome and very friendly dog. He has the same white paws as Kai and the shiny black coat. Kalu lives on the street, outside a park, and is a much-loved community dog. He was neutered after this litter was born. Kai's mother Kali is a timid dog who has never allowed any human to touch her. Yet she is very sweet and waits for me at the same spot every evening for her meal.