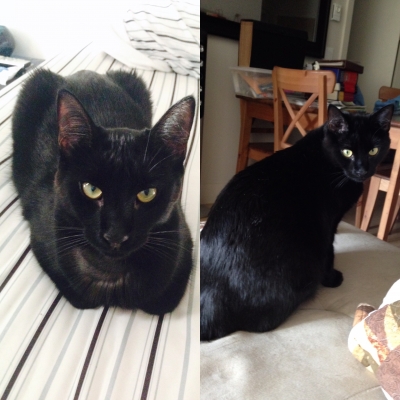 We adopted our beloved Stumpie from the pound in Jan 2014. She was the friendliest kitty, we fell in love with her immediately. They told us she had some diarrhea, but it had since cleared up. She was found in a box on the side of the road, so they didn't have her history, but she was estimated to be about 6 months old. They told us which food she was on, and we bought some on the way home. We took her home and gave her a bath and she settled right in.

A couple of weeks later, her diarrhea was still a problem. We thought it was maybe just the stress of shelter living, and what she had been through. But we took her to the vet. He gave her some antibiotics and ran some tests. That was the beginning of our monthly vet visits. We had to go back every 3-4 weeks, trying new antibiotics and other different medications. Nothing was working. We put her on some specialty vet food. It got marginally better, but then would get worse again. She started to get really sick, and was losing weight. She went from 12 lbs down to 8 lbs. We were desperate, so we had the vet do an ultrasound and more blood tests. He came to the conclusion that she had feline irritable bowel syndrome. We decided to feed her some plain boiled chicken, and try some steroids and more antibiotics. This worked, she recovered and started gaining weight again. But still had the diarrhea. The vet said that this was likely the best she would get, that we would just have to live with her condition. I asked about a raw diet at that time, but he said that since she was gaining weight on the vet food, it is best not to change her diet. So, we stuck with the vet food and antibiotic routine. About 6 months later, I found out I was pregnant. We decided that we needed to figure something else out, since there can be danger to the baby with toxoplasmosis, and our poor Stumpie left traces of diarrhea all over. So, we did a little bit of research, and found a raw cat food supplier nearby. We spoke with the owner, Brigette of Mutt & Moggy, and told her our story. She was confident that this would cure our cat. She gave us some samples to try. Within 2 days, Stumpie had normal stools, for the first time in her life. We were absolutely beyond thrilled. We continue to only feed her raw food, from 3P Naturals. And almost 9 months later, she maintains her 13lbs, and is a happy healthy normal cat. 3P Naturals, and Brigette, saved our kitty's life, and we are forever grateful :)

If you have a testimonial about your four-legged companion and a 3P Naturals raw diet, we would love to feature it on our site.  Just send your written testimonial and a picture of your animal friend to [email protected] and we'll post it on our site!