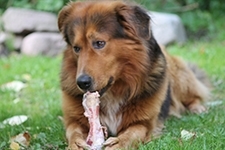 Aggression is a behavior that animals show to protect themselves and their pack mates, and ultimately ensure their survival. Aggressive behavior has many root causes. Some are behavioral and some biochemical. Below, the connection between aggression and diet is discussed.

Some pet owners claim that raw dog food made their dogs more aggressive. As mentioned above, aggression is a behavior that can arise when an animal is introduced to a new diet, however, there are several considerations that need to be made:

In my 15 years of experience with raw pet food diets, I have never seen a case of a raw diet causing aggression, however, dogs can display behavior known as 'resource guarding' after the new diet is introduced. This behavior is usually seen in dogs who are very keen on their new diet, especially with the introduction of raw meaty bones. If your dog shows this behavior when you try to touch his or her food bowl or bone, contact a qualified animal behaviorist (preferably one with positive methods) immediately to help you sort out the problem.

Resource guarding must be addressed correctly and in a timely fashion so that it does not become an ongoing issue. Dogs who become possessive of their food must be taught how to 'share' their food and not guard it. They also must be given the chance to understand that if food is taken, it will be given back so they do not need to guard it. If your dog shows these behaviors after switching to the new raw dog food diet, do not try to solve the problem yourself since you could, unknowingly, make the behavior worse, injure yourself or put your dog in a compromising situation.

Studies show that processed foods can cause ADHD-type symptoms in children who, when switched to a preservative and sugar-free diet full of fresh foods have greatly reduced and/or a disappearance of symptoms. This phenomenon has recently been considered by veterinarians as a possibility in pets. Processed canine diets can be just as detrimental to behavior so we must consider this when considering that raw might do the same. A preservative-free, natural diet is more valuable in a dog's eyes and could cause resource-guarding behavior. A processed diet with added preservatives is more likely to cause chemical imbalances in the body that can be linked to aggression. It is important to make the distinction between these two causes.

A switch to a raw dog food diet is a definite change in your dog's daily routine, so if changes in behavior are observed they can be solved easily and quickly with the help of a trainer or behaviorist.