Carbohydrate Requirements for Cats & Dogs: Are They Essential? 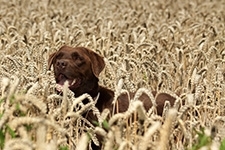 I am often asked by pet owners about carbohydrate requirements for canines and felines. Most pet owners have heard a variety of answers from multiple sources and it can be a source of utter confusion with the array of pet foods available on the market today.

Carbohydrates are a source of energy that can be utilized by animals that have the metabolic abilities to do so. In addition, the quality and a particular source of the carbohydrate must be considered. Dogs and cats each have their own unique metabolic abilities to obtain nutrients from food. There are three sources of energy that can be utilized by most mammals: proteins, fats, and carbohydrates. It has been scientifically proven that carbohydrates are not required for dogs and cats to survive. Their evolutionary path has allowed them to live long and healthy lives without this form of food, presumably because they have evolved for millions of years without it.

Dogs have the ability to obtain energy from processed grains, such as corn, wheat, rice, and barley which are commonly used in commercial pet foods. Whole forms of these grains are virtually indigestible and are passed whole in the feces. Processed versions of these products are known to be utilized within the digestive tract of dogs in the form of starch which is further processed by the liver into glucose. Glucose can be utilized as energy by the cells. A liver enzyme called glucokinase begins the process of glucose phosphorylation, allowing for the conversion of starch to glucose. The pancreas then releases a hormone, insulin, which allows glucose to be absorbed into cells. Without insulin, cells cannot receive glucose and it remains in the bloodstream, a fatal problem if blood glucose becomes too high. Glucokinase only operates within the body when it receives a large load of glucose from the portal vein. Another liver enzyme called hexokinase is used more frequently for phosphorylation of smaller loads of glucose. Processed forms of carbohydrate contain high starch content which is broken down into glucose for which hepatic glucokinase is needed.

Carbohydrate is one of the leading ingredients in commercially made pet foods and is used as an economical source of energy for dogs and cats. The question remains as to whether or not it is appropriate to feed a carnivorous animal a food product that can only be utilized when it has undergone significant processing and that dramatically raises blood glucose levels. In the wild, the only carbohydrates a dog would receive come from the stomachs of herbivores in a pre-digested form and in raw forms such as grasses, roots, and fruits which would be available only seasonally and would make up approximately 5-10% of the total diet. Diabetes and other metabolic-related issues have reached epidemic proportions in canines. It is a disease often related directly to what the animal is eating.

It is well known that the cat has no nutritional requirement for carbohydrates. Cats are known as obligate carnivores because they cannot survive without meat in their daily diet. Cats have unique disabilities regarding the digestion and absorption of carbohydrates whether it is from a raw or processed source. Despite these facts, commercially produced feline diets are high in processed carbohydrates such as corn, wheat, and rice. All feline species are known as obligate carnivores because of the unique ways in which their bodies function metabolically. They obtain the energy they need to travel, hunt, and metabolize from fats, proteins, vitamins, minerals, and amino acids.

Like dogs, raw forms of grain are indigestible and are passed whole in the feces. Processed forms found in cat foods today make up a large percentage of the total diet. Why is this so when it is not a scientifically appropriate source of energy for the cat? Cats are metabolically programmed to use energy from glucogenic amino acids and fat rather than starch. Additionally, they can only convert gluconic acid and glycerol, from animal sources, into glucose, allowing them to regulate blood glucose levels. Other mammals are able to regulate blood glucose levels from carbohydrates by producing hepatic glucokinase and hepatic glycogen synthetase. The cat liver has virtually lost the ability to produce these enzymes after millions of years of evolution. Cats deficient in gluconic acid and glycerol suffer from adverse metabolic effects such as hyperglycemia and increased glucose in the urine (diabetes). Starches, amino acids, and fats are no interchangeable sources of energy. Appropriate sources must be given to particular species depending on their metabolic abilities.

Additionally, cats produce only 5% of the pancreatic amylase (an enzyme that breaks down starch into glucose) that dogs produce. A historically starch-free diet has resulted in a lack of need for this enzyme. This means the cat is unable to receive much energy from starches.

In dogs, the most common form of diabetes is type 1 or insulin-dependent diabetes. Type 1 diabetes occurs when the pancreas stops producing insulin resulting in the inability of cells to absorb glucose. These animals need to be managed with injectable forms of insulin so that they do not become ill or die.

Animals are not often born with diabetes and it is well-documented that diet is an extremely important factor in causing, preventing, and controlling diabetes. Generally, conventional diets created for dogs with diabetes contain high protein and low starch. What does this tell us? Even conventional veterinarians are aware of the importance of a high protein, low starch diet for the survival of animals living with diabetes. It may also be questioned as to whether any of the animals suffering from this disease would not have developed it if they had been on a natural diet, balanced with high-quality protein and no starch.

Protein provides energy from amino acids which are slower to be absorbed and do not create large loads of glucose that the body must regulate. Several types of amino acids also have a regulatory effect on blood glucose and are longer-lasting sources of energy for cells compared to glucose.

The most common type of diabetes in cats is type 2 where the cells within the body do not utilize glucose from the bloodstream. This disease has also been conventionally addressed with a high protein/low starch diet and is often all that is need to reduce or eliminate the need for injectable insulin. A study on cats with diabetes fed a high protein/low carbohydrate diet resulted in a 50% or higher reduction in insulin required for 88.9% of the cats involved. In my four years of experience working as a nutritional consultant for a holistic veterinary clinic, switching cats from commercial foods to a balanced raw diet resulted in diabetic remission in all cats under my care.

It is likely that diabetes in cats is essentially caused by improper diet since, in most cases, it is 100% treatable with a change to a high protein diet.

After examining the unique metabolic functions and common pathologies of the dog and cat, it seems logical that scientists have come to the correct conclusion already: carnivores, whether obligate or not have no real use for dietary carbohydrates. In fact, processed grains may be responsible for several common diseases that plague companion animals today. If your cat or dog is suffering from diabetes, contact a holistic veterinarian versed in a raw diet that helps you switch your pet safely. You will most likely see dramatic changes in your pet’s blood work and overall health status.