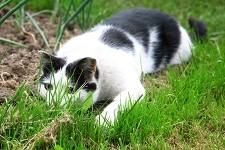 The cat is an evolutionary phenomenon. Its behavior is a direct result of a highly specialized nervous system and body structure developed over millions of years. Cats have a fantastic arsenal of behaviors and skills that help them to hunt and survive as predators. Even when cats are left homeless and not fed by humans, they are able to adapt and hunt for themselves.

In a natural setting, cats hunt a variety of prey including mice, rats, voles, squirrels, and birds. Our domestic feline friends are hunters too. Most cat owners who allow their cats to go outside may have had a not-so-welcome present brought to the doorstep, in the form of a dead mouse or rat. Indoor cats retain their predatory instincts even if they have never caught prey. Popular cat toys include feathers and fur mice which are enthusiastically chased and pounced upon. In this article, the predatory nature of the cat is revealed. We must not forget the origin of the cat so that we may care for them properly.

Cats have highly sophisticated night vision. They have a reflective layer (called the tapetum lucidum) behind the retina of the eye that allows them to see up to 7 times better than humans at night. Naturally, cats are more active at night as hunters and this adaptation allows the cat to successfully spot prey in the dark.

Cats and humans have a similar range of hearing low-frequency sounds but they can hear higher-pitched sounds much better than us, up to 64kHz. This is approximately an octave higher than that of the dog’s range of hearing. When they listen, a cat’s ears swivel back and forth and ears can move independently to pinpoint the exact origin of a sound. Cats can judge the origination of the sound within 3 inches of accuracy from 1 yard away. This is an invaluable skill for an animal looking for prey.

The domestic cat’s sense of smell is 14 times stronger than ours. Cats have twice as many olfactory receptors in their nose as humans do. They also have a scent organ called the Jacobson’s organ on the roof of their mouths. A cat behaves by wrinkling its nose, lowering its jaw and tongue, it is opening the passage for the organ. New studies are showing that cats may even have a more sensitive sense of smell than dogs possessing an average of 200 million olfactory receptors.

The cat has 24 vibrissae, better known as whiskers. Most are located on and around the face but some are also located on the lower part of the cat’s legs. The part of the brain that processes information from the whiskers allows the cat to create a 3-dimensional map of his surroundings. The whiskers pick up tiny vibrations that are created in the environment. The upper and lower rows of whiskers can move independently from each other for more accurate measurements of the cat’s surroundings. They help the cat pinpoint prey as well as navigate accurately in the dark.

The cats’ natural hunting instincts have played a large role in their domestication. Humans have used cats as a form of pest control for rats and mice for thousands of years. Domestic cats are a major predator of wildlife in the United States killing 1.4–3.7 billion birds and 6.9–20.7 billion mammals annually.* Cats are strategic hunters. They have two hunting strategies: lying in wait to ambush prey or actively stalking and capturing prey. They are known to seek high places which could help to conceal them as they search for prey and survey the territory. Felines are known for their playfulness. Kittens are especially playful as they develop their hunting skills through chasing, pouncing, grabbing, kicking, and stalking.

The cat’s predatory nature as well as its unique evolutionary adaptations have allowed it to thrive all over the world in almost any environment, including ours. Their talent and intelligence make them wonderful companions to humans and successful as a species. We can take good care of them by remembering that even though they are our companions, they require a diet that promotes good health: a raw, prey-based diet.