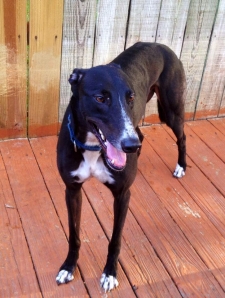 Guy: He is just a big, goofy, happy boy. He loves life and loves everyone he meets. Almost 2 yrs ago, he was coming out of our condo, zigged when he should have zagged and broke his leg (at the "wrist" area).The reason it broke was that he had bone cancer (the bone broke at the tumor site).  He hadn't shown any signs of cancer and we were able to catch it early, before it spread. We made the decision to amputate (no chemo or radiation) and he's been going strong ever since. At the end of November, it will be 2 yrs since his accident. He is almost 12 and is still the most joyous dog we've ever had. He also had a good career (130 races, raced mostly in Arizona and Colorado, racing name Glo's Big Guy). 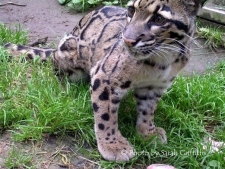 Meet Lissa. She is a clouded leopard. We've worked with several species of wild cats and Lissa was one of our favorites. Also known as Neofelis nebulosa, it is believed that this beautiful cat is the link between the big cats and the smaller feline species. These cats live from the Himalayas through Southeast Asia and into China. They are highly endangered and it is believed that there are only 10,000 adults left in the wild. Clouded leopards are formidable arboreal hunters that can literally fly through the trees. Lissa was housed at a conservation center that focused on helping raise awareness and funding for endangered wildlife. Her diet included whole quail & chicken, day old chicks and red meat. For more information and to help clouded leopards in Thailand, visit http://www.cloudedleopard.org/

Shahira is a beautiful 3yr old female Bengal. She loves all the attention she can get.  She’s not super keen on being picked up and held for a long time, though she is a real snuggle bunny for the moments that you hold her.  She loves to sit on laps and loves to be petted.  She has endless energy for play and requires lots of time for it.  She would prefer an adult home, great with dogs.  Interested adopters will be local home owners and will be asked to complete a mini profile of their home life to [email protected]. Please share and find her a home! 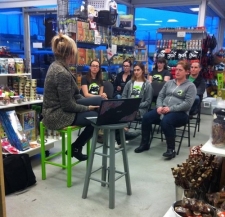 In the month of October, 3P Naturals will be offering two free raw diet education sessions. We believe that education is paramount whether you are new to raw, switching your pet or if you have been feeding raw for years. You can always learn more and here's your chance to obtain a wealth of knowledge for free! Did you know we offer free nutritional counselling, raw diet planning and ongoing support for our clients? Did you know that as a 3P retailer, you can book these sessions for free for your own store? Attend an educational evening and learn about the best way to feed your pet.

Not All Raw Diets Are Created Equal 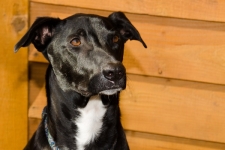 With the rising popularity of raw diets for pets, new raw pet food manufacturing companies are on the rise. Just as with dry diets, not all raw foods are created equal. So how do you decide which foods to feed? Many of the negative stories you have heard about raw diet are a result of improper education, poor diet planning and poor quality foods. Below, are some of the key points you should take into consideration when choosing a raw diet for your dog or cat.